Sectarian strife has become a challenge for the security and stability of Pakistan. Since 2006, more than 4000 people have been killed in sectarian nature attacks in Pakistan. Thousands of people, including professors, intellectuals, scholars, lawyers, traders, doctors, engineers, civil and military officers, young students, children and women have been targeted because of their sectarian affiliation. This bloodshed has been fueled by militant sectarian organizations that propagate intolerant and radical ideologies. Though various religious sects live together, side by side, since many years, these extremists were strengthened by the existing sectarian narratives that declare the other sects as infidels, deviant and foreign. While these narratives do not always inspire violent action, they nonetheless justify distrust and suspicion of those with differing faiths. These popular misgivings make it challenging for the government or civil society groups to openly and directly confront whatever radical minority is perpetrating the actual violence.

It was late in December 2014 that the government of Pakistan, responding to the deadliest attack on Army Public School in Peshawar week earlier, announced its counter-terror strategy National Action Plan (NAP). With regard to counter sectarian terrorism, NAP’s clause 18 shows the state commitment against sectarian violence in Pakistan; however the state’s approach in dealing with sectarian violence has been oriented around counter-terrorism so far without addressing the causes and drivers of sectarian militancy. There are some efforts to counter sectarian narratives emerge sporadically from individual religious scholars, however, they do not always possess the tools or capacity to effectively disseminate their message. To address this issue, connections must be developed between credible Pakistani scholars and experts and local leaders who can leverage their social capital to alter religious narratives at a grassroots level in a proven, systematic fashion.

To address this critical need, the PEF started a project “Countering Sectarian Narratives in Pakistan” in 2016 with the collaboration of International Center for Religious and Diplomacy (ICRD)  that seeks to develop and disseminate a counter-narrative to sectarian divisiveness and promote peaceful coexistence in Pakistani society.  This effort is relying on a coordinated outreach program driven by a network of mid-level religious and civil society leaders who are being trained as advocates and supported by regional “Inter-Sectarian Reconciliation Councils” made up of influential religious leaders who can leverage their extensive social networks and media presence to defuse outbreaks of sectarian tension and embody inter-sect cooperation.

The objectives of the project are to: 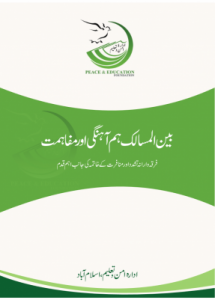 PEF has prepared a narrative for sectarian reconciliation through continuing process of consulting with renowned religious scholars, academia and intellectuals. The narrative report begins with the identification of five major sectarian issues inflicting Pakistan. In the light of these issues, a counter sectarian narrative and its implementation mechanism has been developed. There are many teams of advocates comprising of religious leaders from all sects are working in their communities to disseminate this counter narrative. We fervently hope that, a mark reduction will be possible in sectarian violence in Pakistan, by the implementation of the narrative of sectarian reconciliation.

“A positive thinking and knowledge emerged that changed our hearts and minds. Wherever we go, the people appreciate our efforts for sectarian coexistence. We hope the hate and violence among different sect will be decreased in results of our ongoing campaign.” (Maulana Salman Shakir from Salafi school of thought, Peace Advocate from Punjab)

A healthy coordination was observed among all the advocates during the evaluation meeting. The advocates admired this program and said that this program gave us opportunity to meet and sit together with the followers of other sects, so we should continuously organize such programs to coordinate each other and work for sectarian reconciliation. The peace advocates acknowledged that after this initiative they have become a family and they all meet each other regularly and participate in each other’s events.